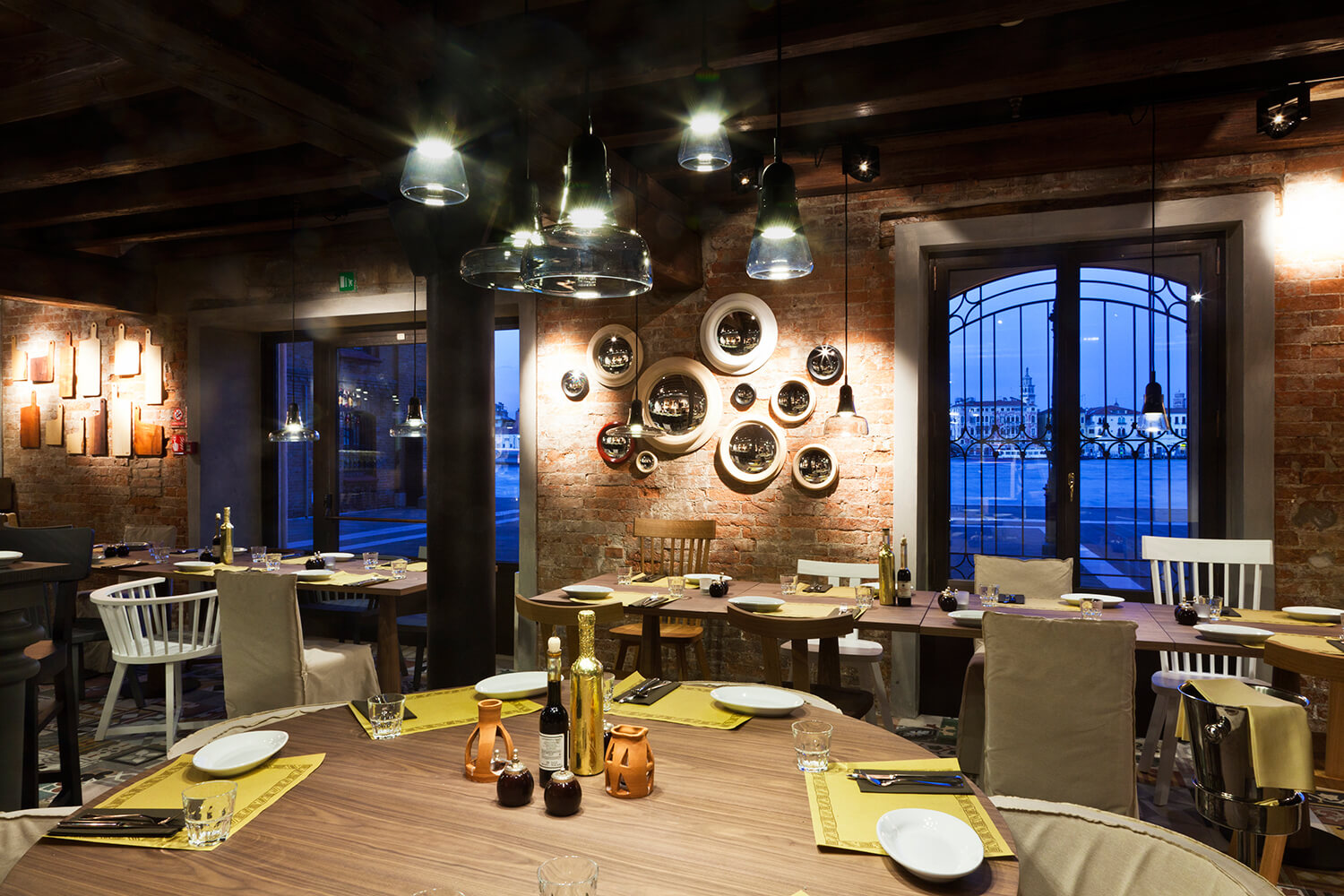 A contemporary bacaro in the Giudecca island of Venice, art district, within one of the most important industrial archeologies of the city.

Working in Venice, we are usually outsiders in the city, that is, it is not often that our clients are Venetians but, more often than not, companies outside the city ask us to make, by chance, some projects.
In this case the hotel chain Hilton took us on a project inside the Hilton Hotel in Venice which is located in the Molino Stucky, a large neo-Gothic industrial building from the late nineteenth century that, due to its grandeur, strongly marks the skyline of the Giudecca island.
According to the then London hotel manager, “the problem with this hotel is simply one: it’s a Hilton that could be in Singapore, Stuttgart, Venice or anywhere else in the world; it is the same everywhere, you eat the same things, the menu is the same; that is, space and hospitality are part of a Hilton methodology that is totally devoid of relations with the context and the territory. There is therefore the need to create a space that manages to build a dialogue with Venice, an authentic experience of the city, to evoke its atmosphere. It is useless for us to have a Hilton in this iconic city without ‘transmitting’ its unique values”. 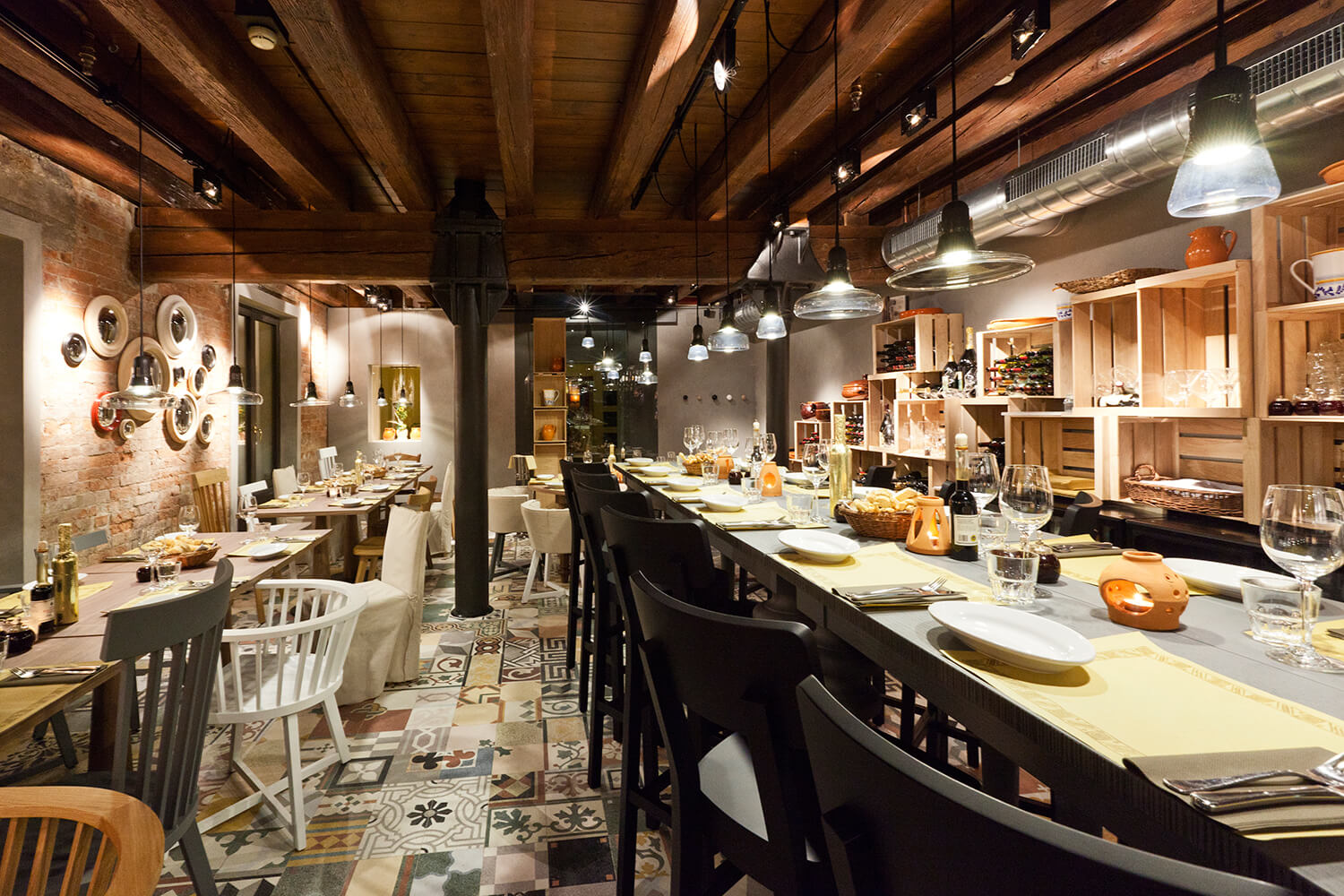 Hence the genesis of the project: the intention to propose very simple solutions with the basic idea that Venice is characterized, substantially and in a nutshell, by the combination of two things that can really interest those who visit it: the the theme of art and the theme of food. Thus Bacaromi was born, a sort of contemporary bacaro run by a Venetian “true host”. A space that seeks to investigate what the iconic and distinctive elements of a bacaro are, without, however, replicating in an artificial way and therefore not authentic something that exists. 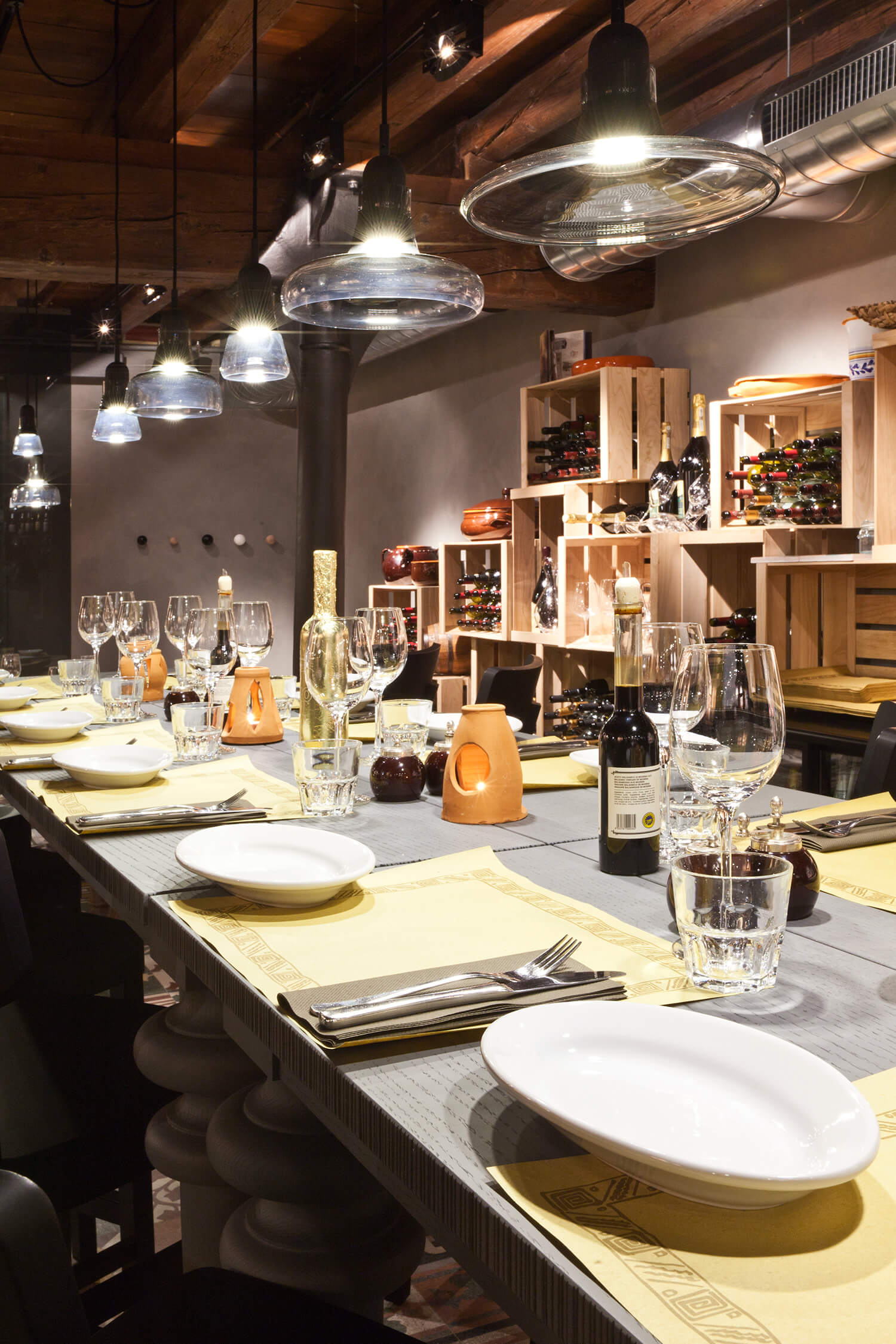 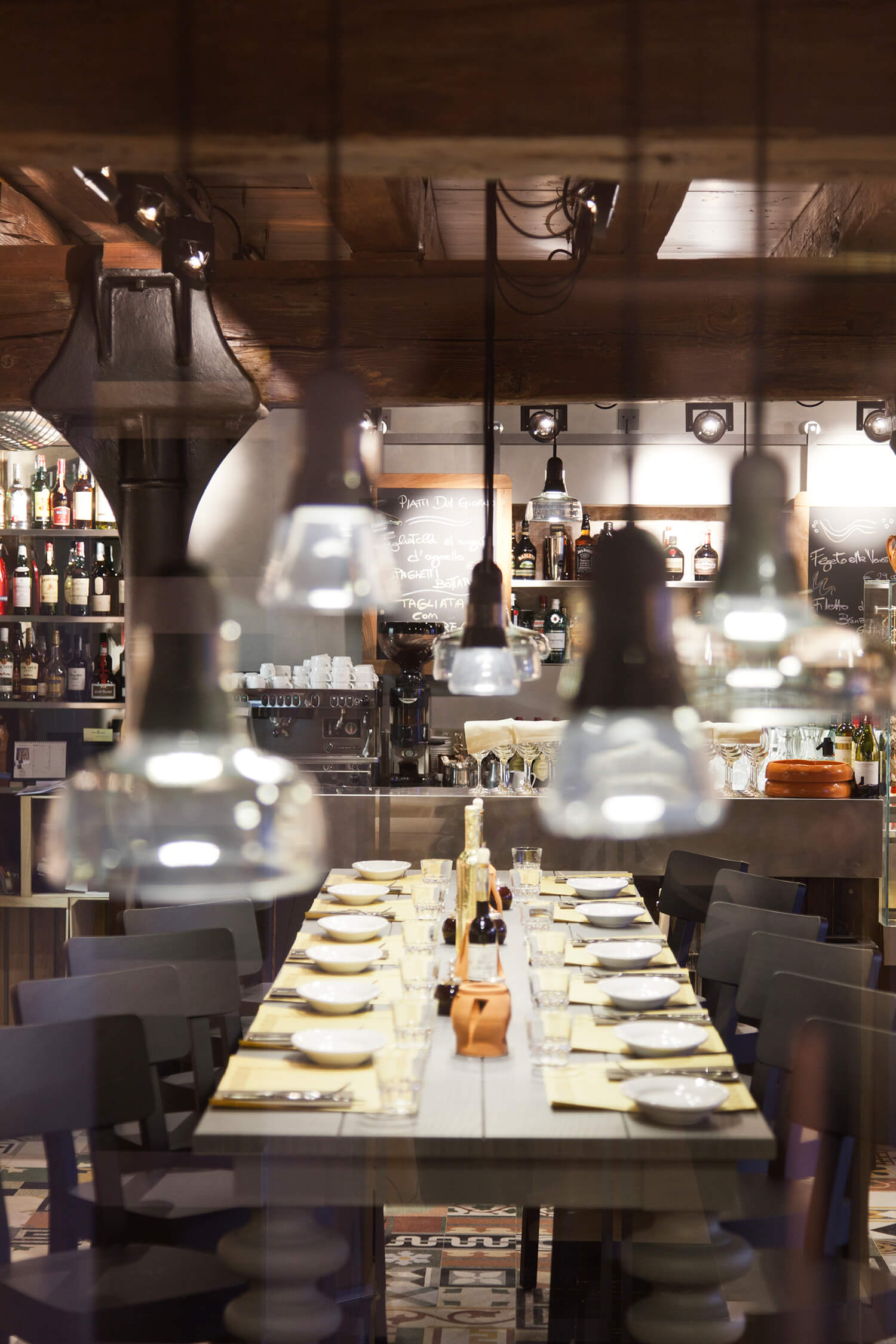 Bacaromi, a sort of contemporary bacaro run by a Venetian “true host”. A space that seeks to investigate what the iconic and distinctive elements of a bacaro are, without, however, replicating in an artificial way and therefore not authentic something that exists. 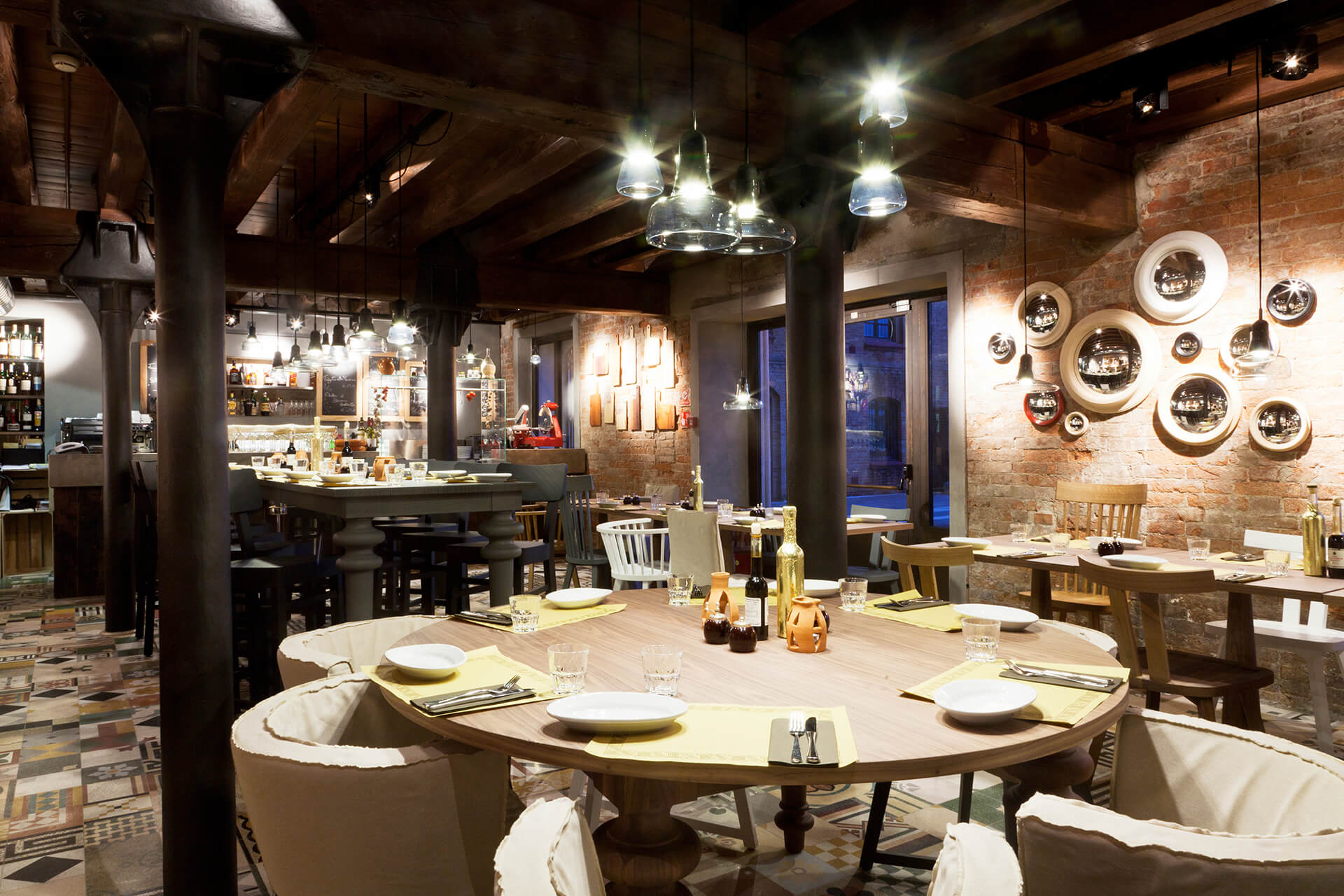 In the space some typical elements of Venetian architecture are used, such as the exposed brick, the structural elements in cast iron and wood of the former industrial space, the signs of craftsmanship such as the famous hemispherical mirrors designed by Fortuny, the cutting boards of a well-known laboratory dedicated to woodworking in the city, images of contemporary artists, groups of lamps made with glass.
The space is then characterized by the use of a series of resulting cement tiles with which had been used previously for works inside Molino Stucky. With them -every cementina is different from one another- we created a pattern that has become a distinctive element of architecture. 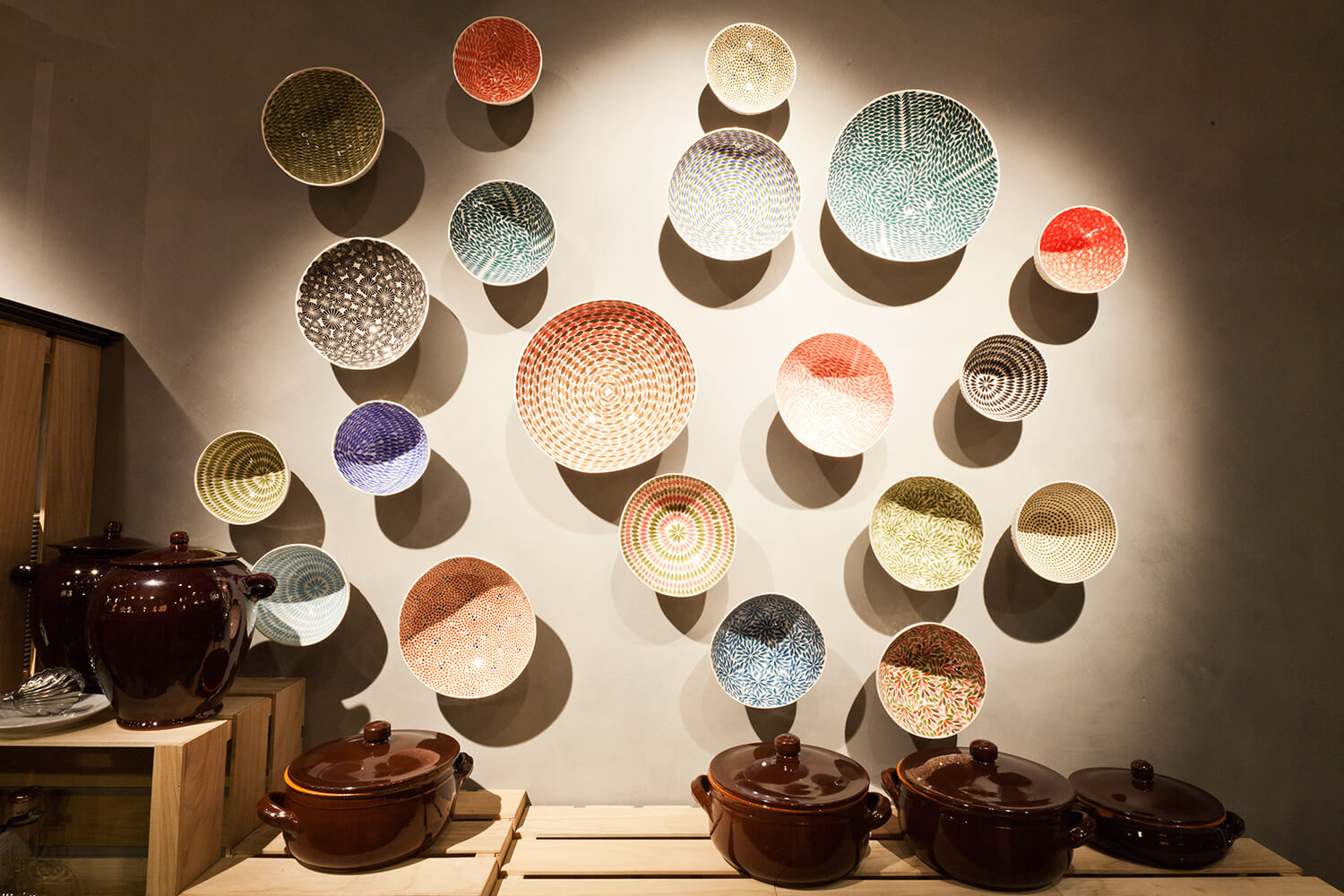 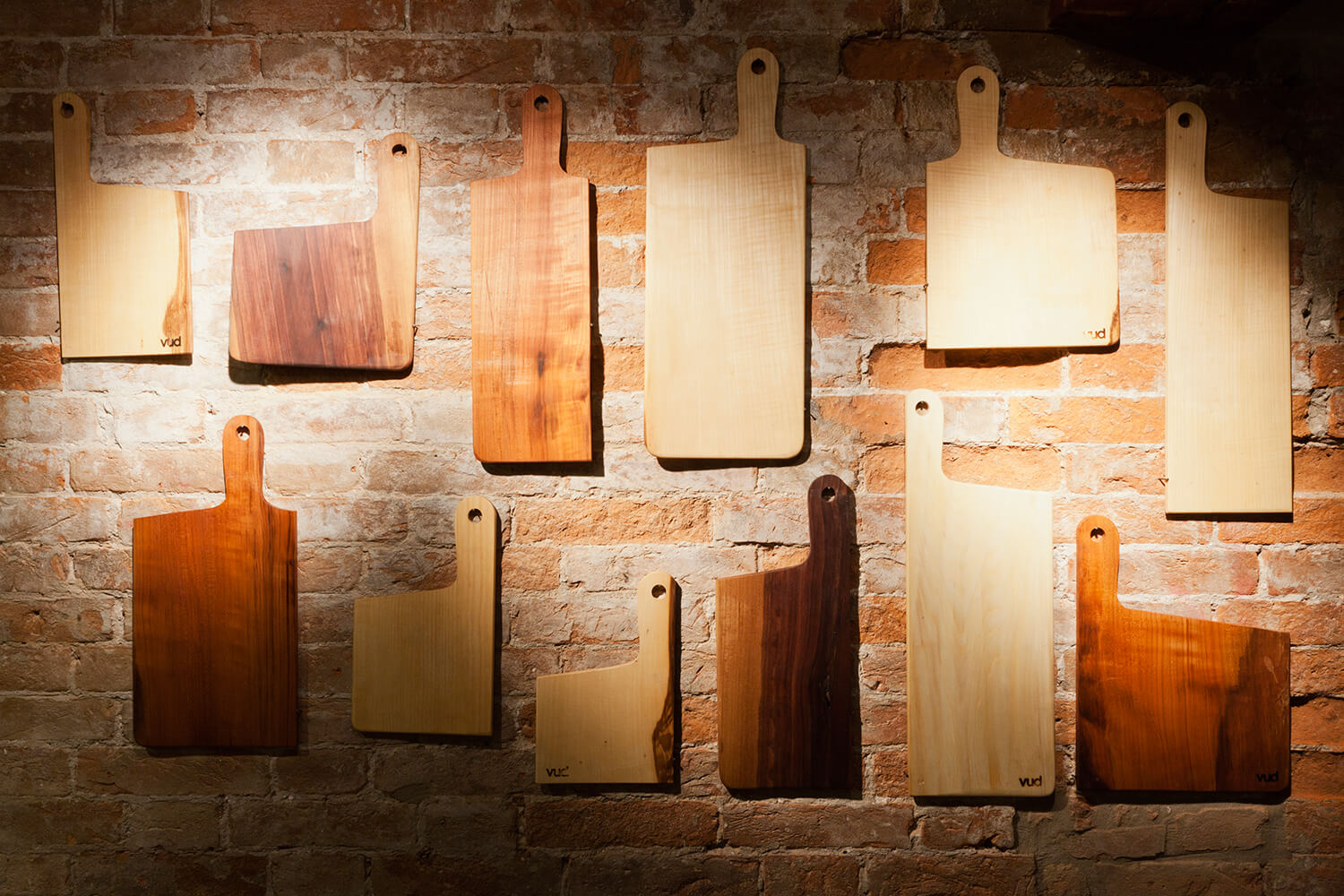 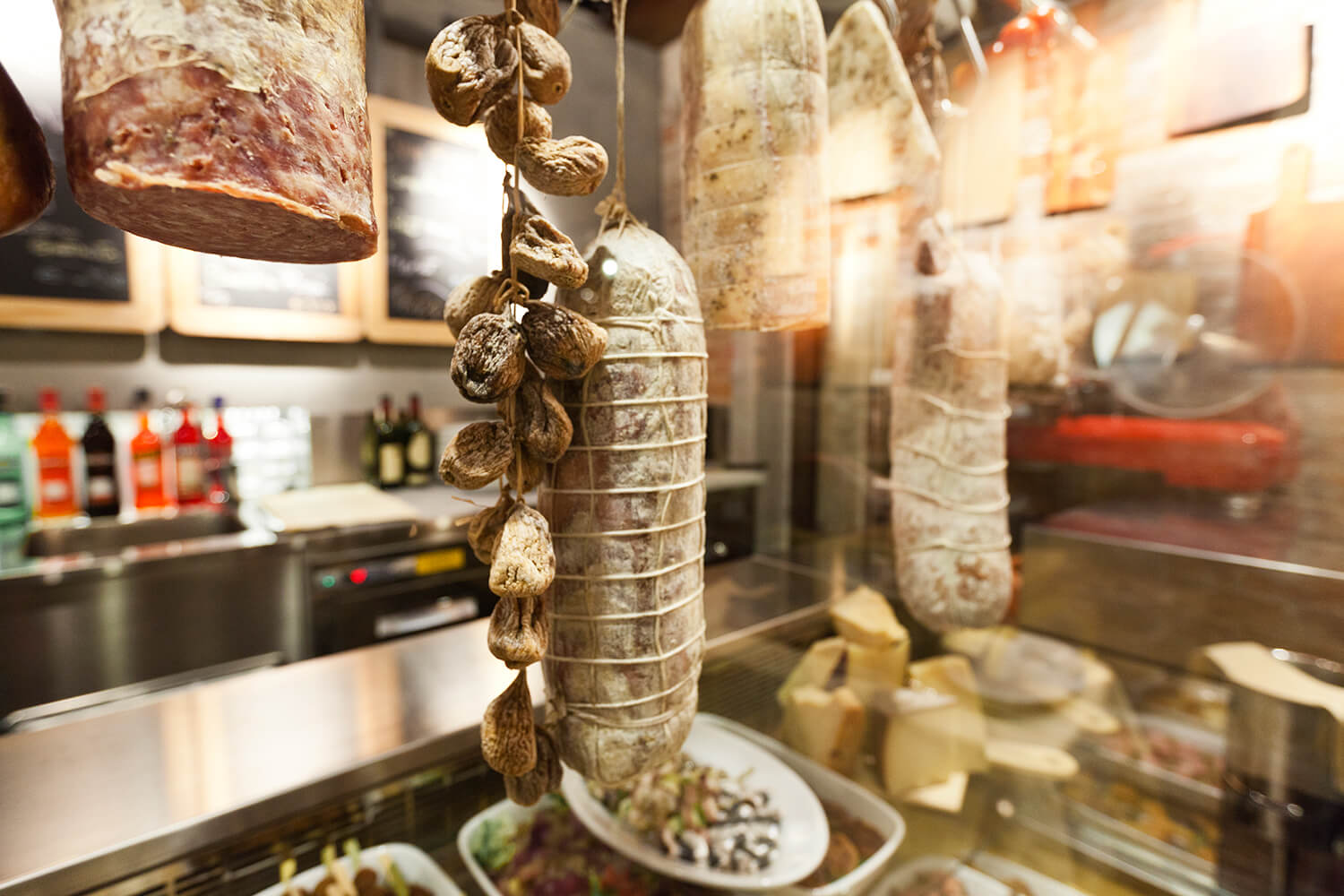 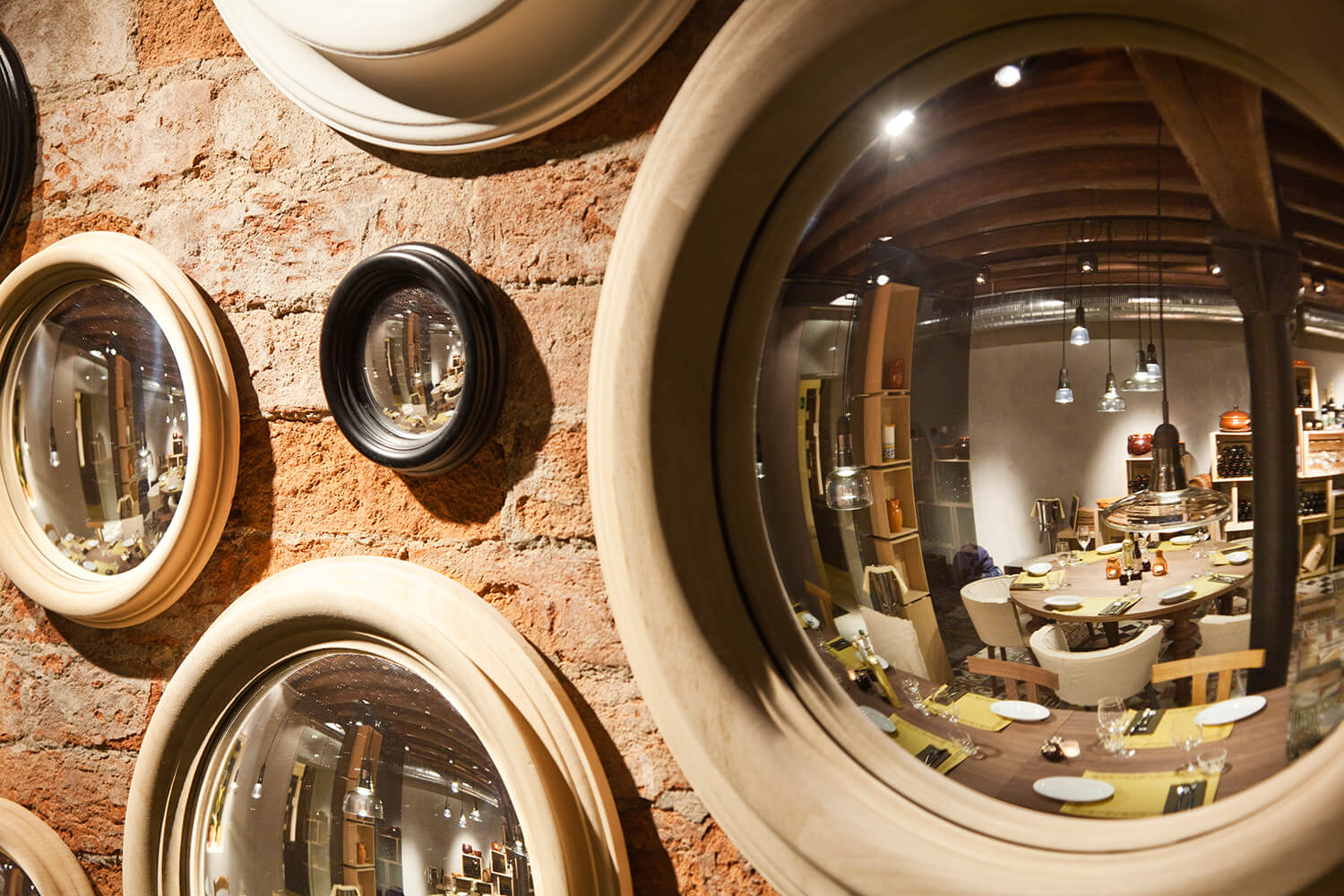 Each design choice was aimed at making this place representative of a territory, of a city, but trying not to make bad imitations of things belonging to the soul and tradition of Venice and, instead, to express its values in a “fresh” way, by placing works by contemporary artists linked to the history of the city, food, glass, decoration and creating, through these signs, a sort of contemporary reconstruction of the ingredients of a bacaro.
Moreover, the view of the Giudecca canal that can be enjoyed from the Osteria Bacaromi is terrific and is an element that contributes considerably to the force of suggestion of this space. 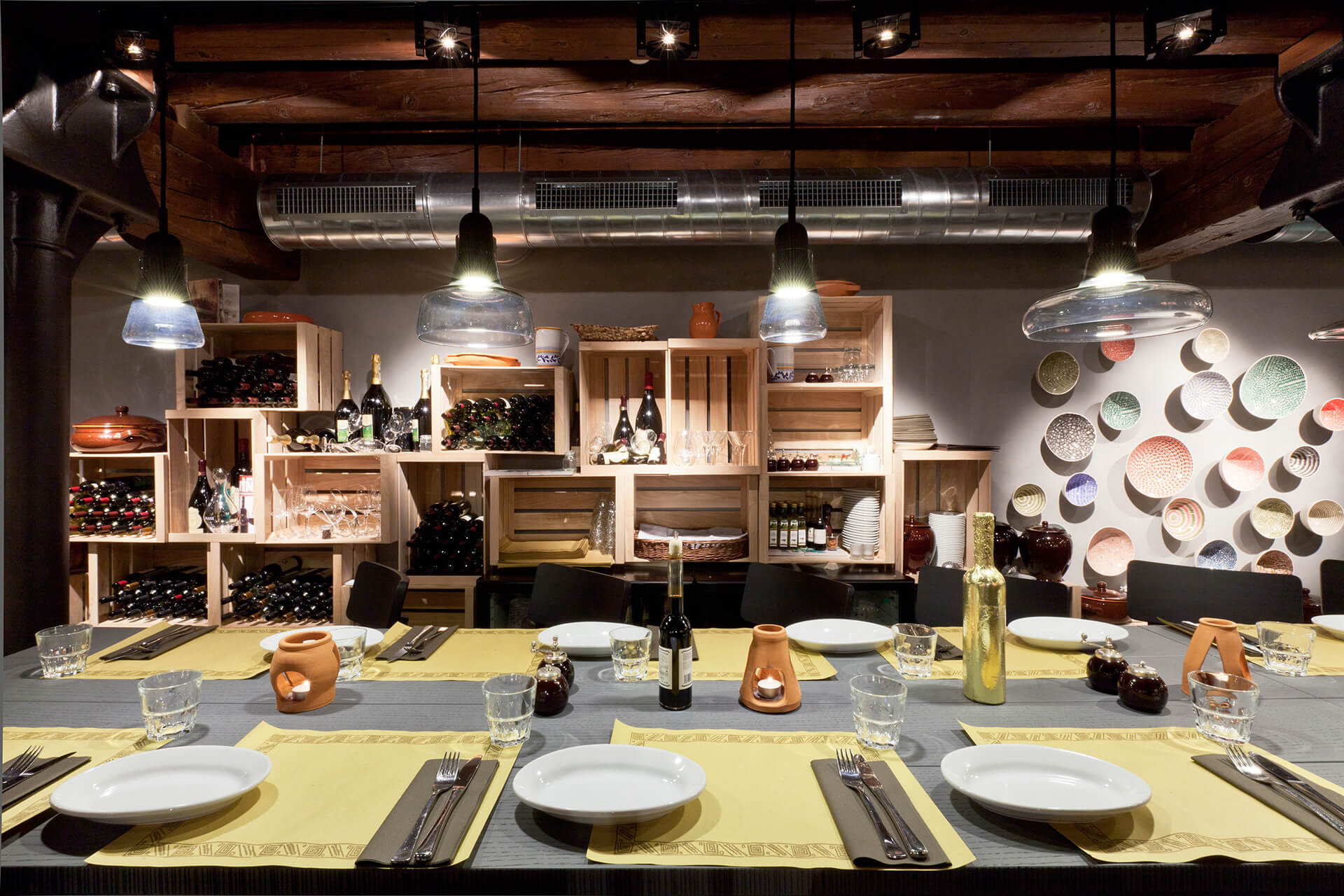 Bacaromi has had an extraordinary success.
This is because, of course, it is the Hilton, the great hub of all American tourism in Venice; but above all because –we think– the experience of eating Venetian style, in a place where Venice is the main character both in architecture and in vision, is more interesting and meaningful than eating in a completely impersonal space, without any relation to the context where you are. The connection between places, things and people is, in fact, essential for us.

At a later time, in addition to Bacaromi, we also took care of the terraces outside the bacaro, the bar on the rooftop of Molino Stucky → and the Aromi Restaurant →