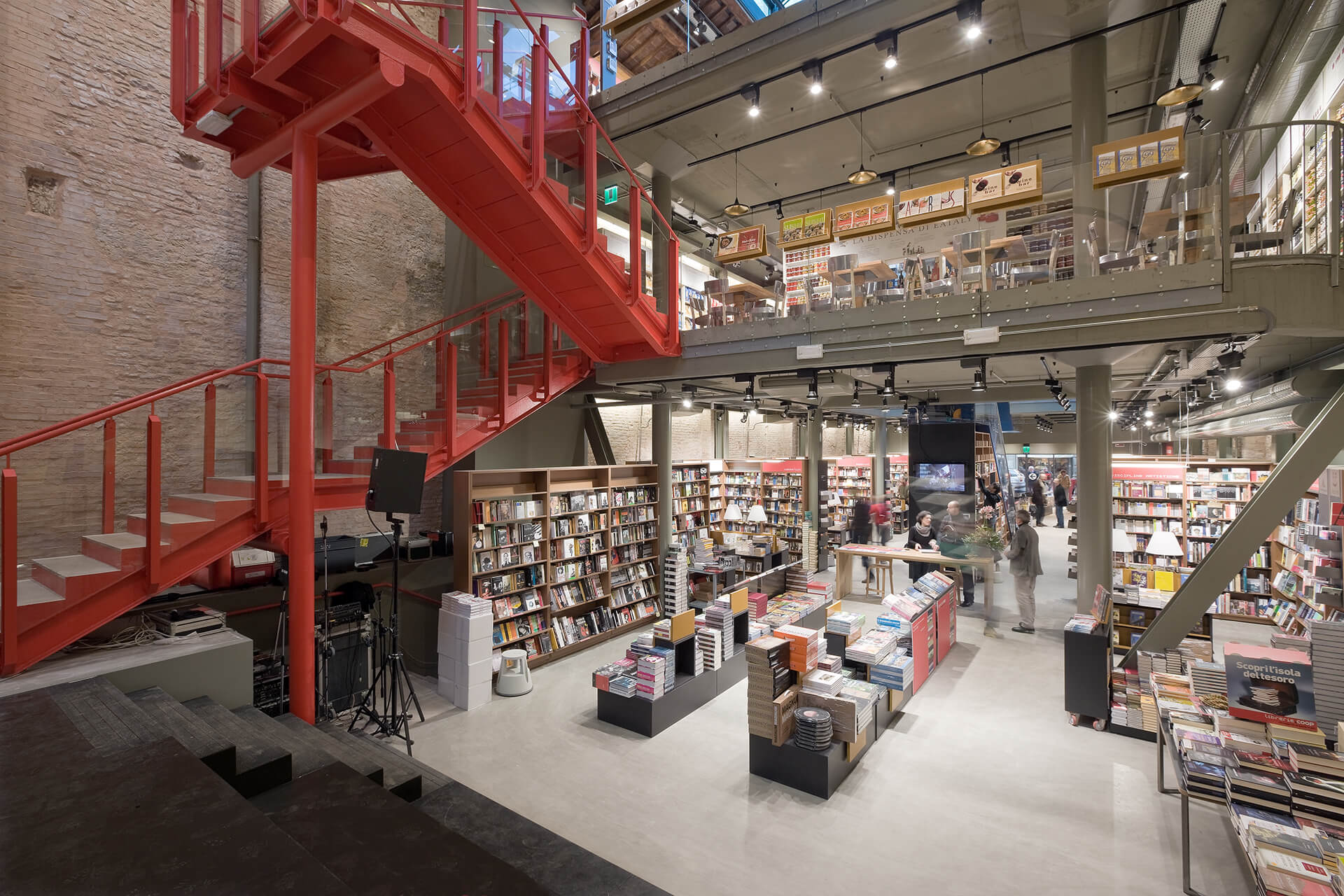 Librerie.Coop and Eataly together in a successful mix of culture and food in an extraordinary space in the center of Bologna.

Librerie.coop Ambasciatori is a characteristic place because it’s the only case in Italy of harmonious combination in a physical space of food and culture.
Born in 2008 from the innovative and successful union of Librerie.coop and Eataly, it is the result of a building renovation and functional adaptation of the building standing between the streets Orefici, Pescherie and Drapperie in the heart of Bologna, Italy.
The building contains, in an area of ​​about 1900 square meters, the most complete formula of the Librerie.coop project and the Eataly space divided into the formulas “Coffee Shop, “Food area” and “Wine and Beer area”, plus a space for book, products and authors presentations.
The peculiarity of the building consists in having undergone transformations over time, from covered merchant street in medieval times (traces of which can still be seen in the apsidal façade of San Giorgio degli Accarisi), in the subsequent nineteenth-century roofed market and in the late rationalist façade of the Eliseo cinema (later named Ambasciatori). The red light cinema was closed around 1985 and since then the building has been closed despite partial attempts at restructuring. 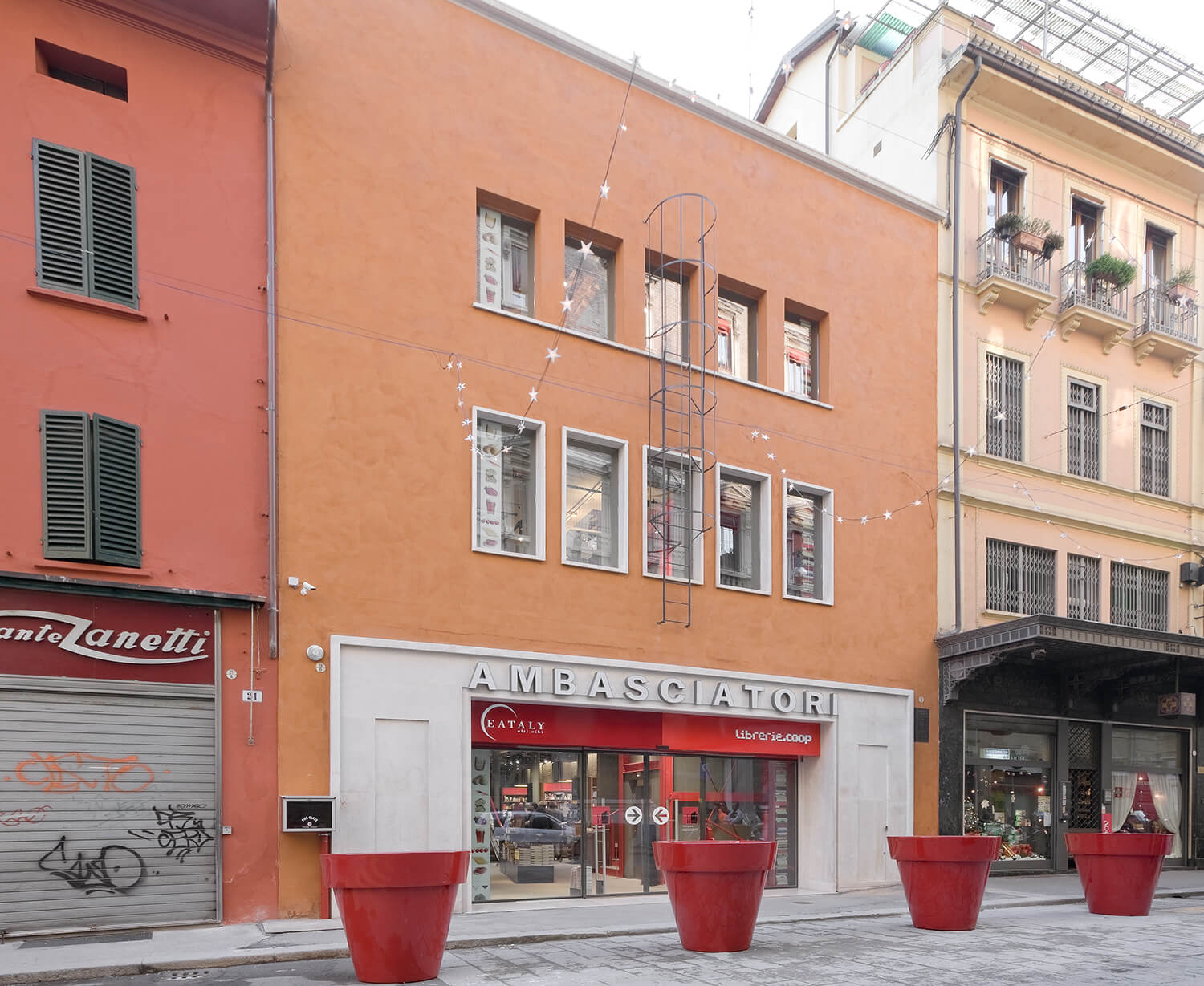 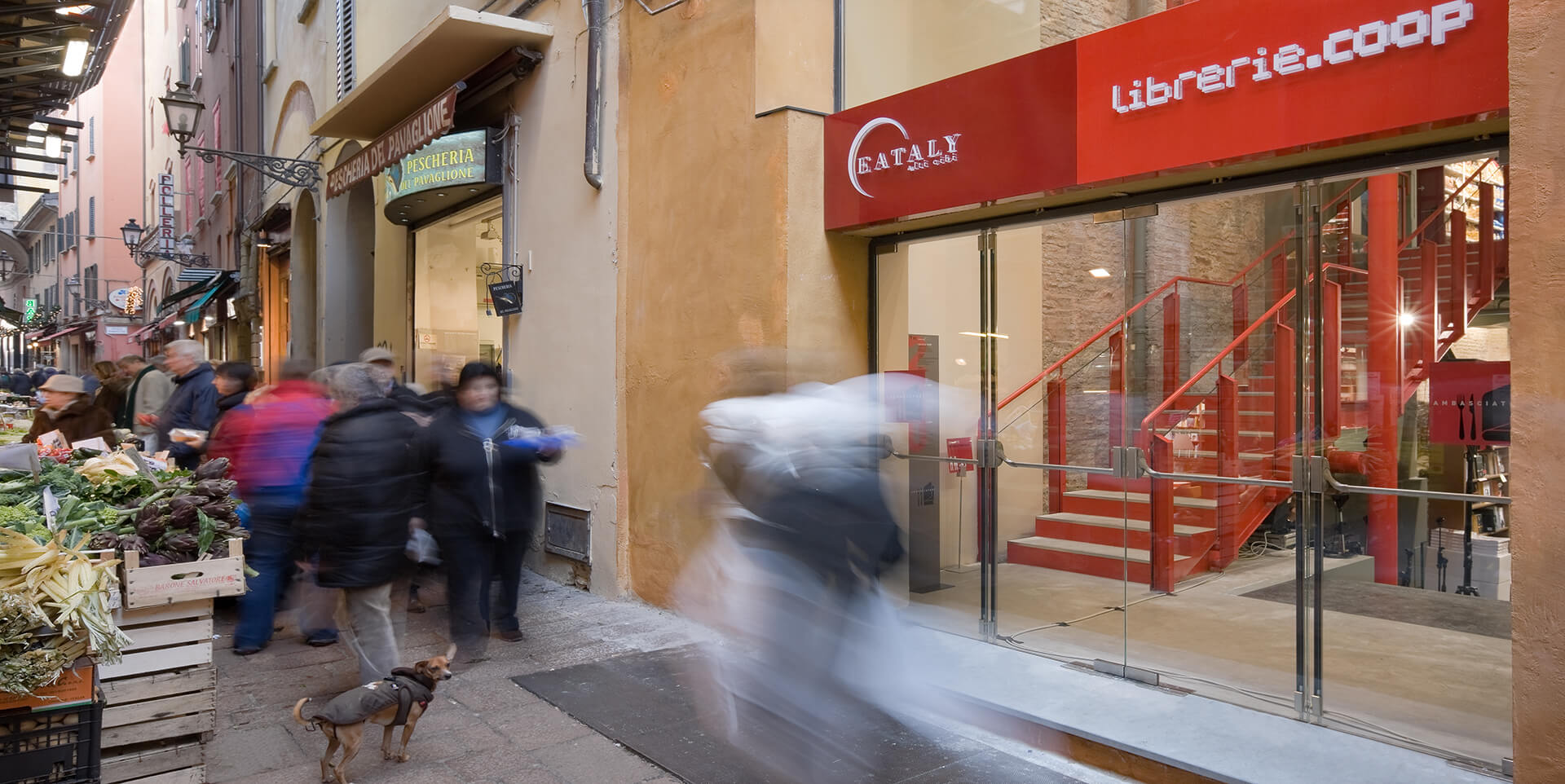 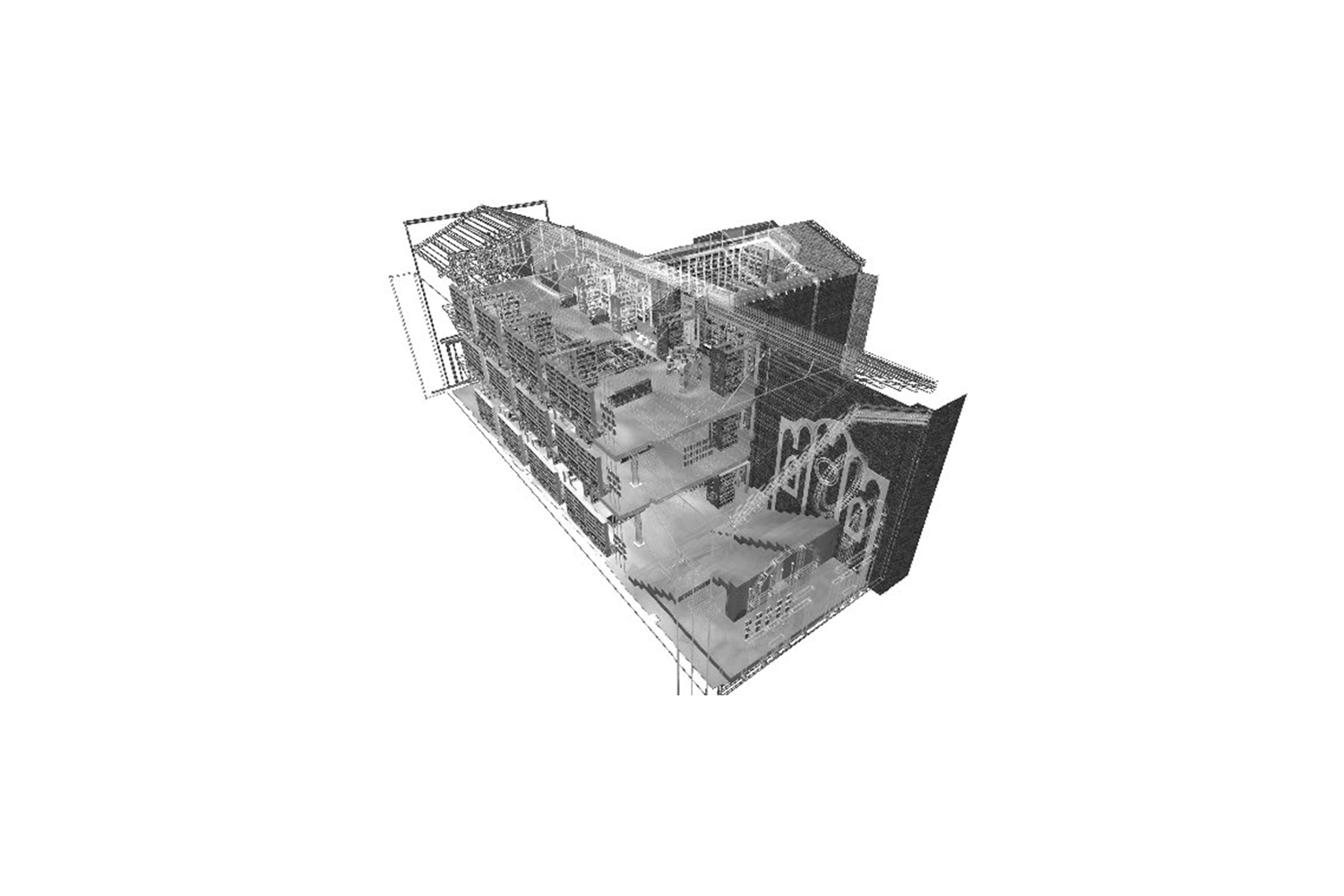 Before the intervention, Ambasciatori had for years been a red-light cinema, then left in complete abandonment for several decades, overlooking Via Orefici, a road leading to Piazza Maggiore, also –at that time– abandoned.
The place, in its stratifications, had three constraints by the Superintendency: it had been an old cinema risen in the Twenties; a market with an eighteenth-century iron and glass vault covering the space that it occupies between the two buildings that flank it and, on the right side, there is also the hint of a facade of a church that was demolished because it continued towards inside the space.
To this is added the presence of an unfinished project of the Eighties that consists of a series of metal pillars that did not find a function for reasons of Superintendency.
Coop decided therefore to realize, through a competition, a project that would combine commercial and cultural content simultaneously. The cultural part was embodied by the newborn Librerie.coop, while the commercial part –in this specific case of “Food”– by Eataly. 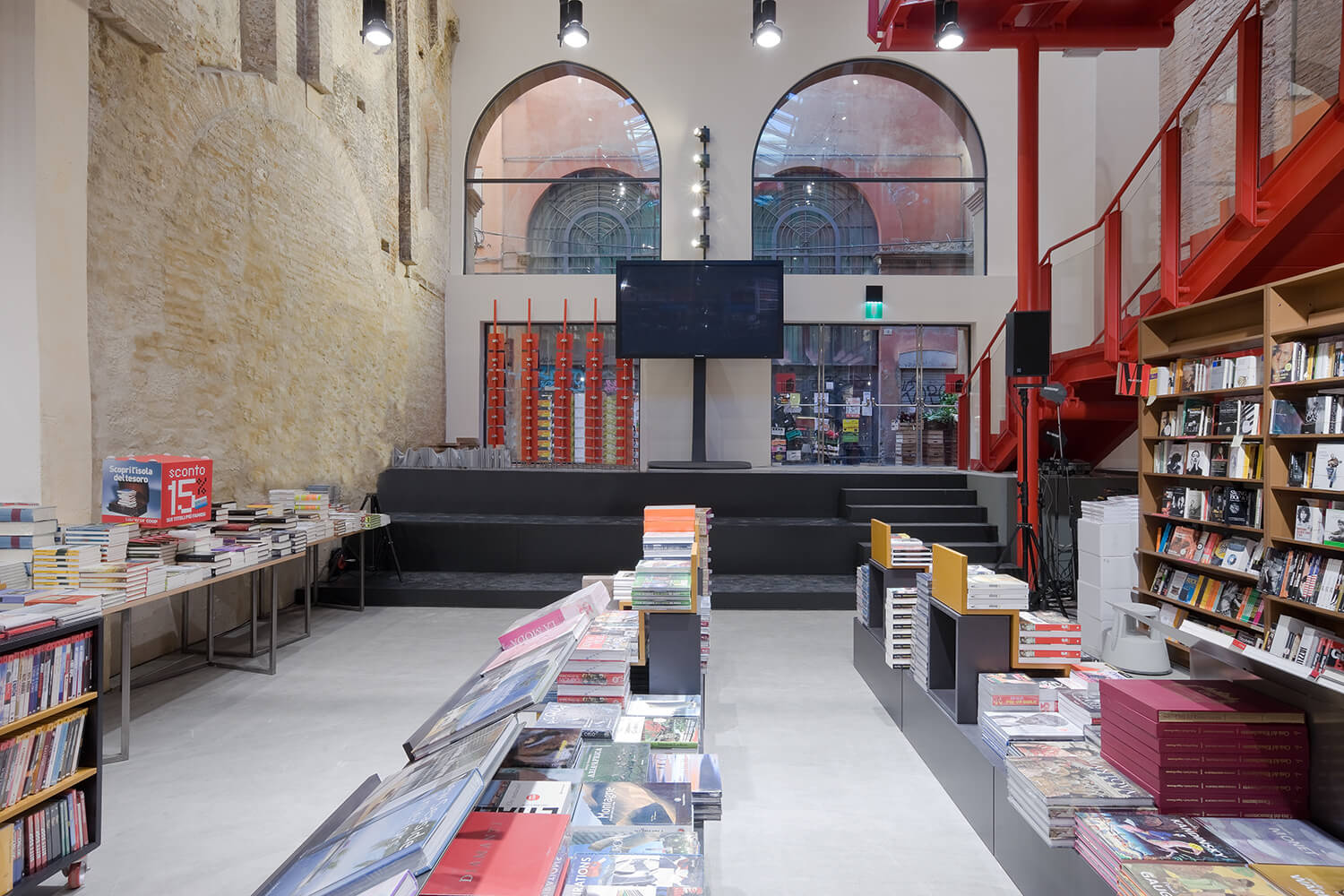 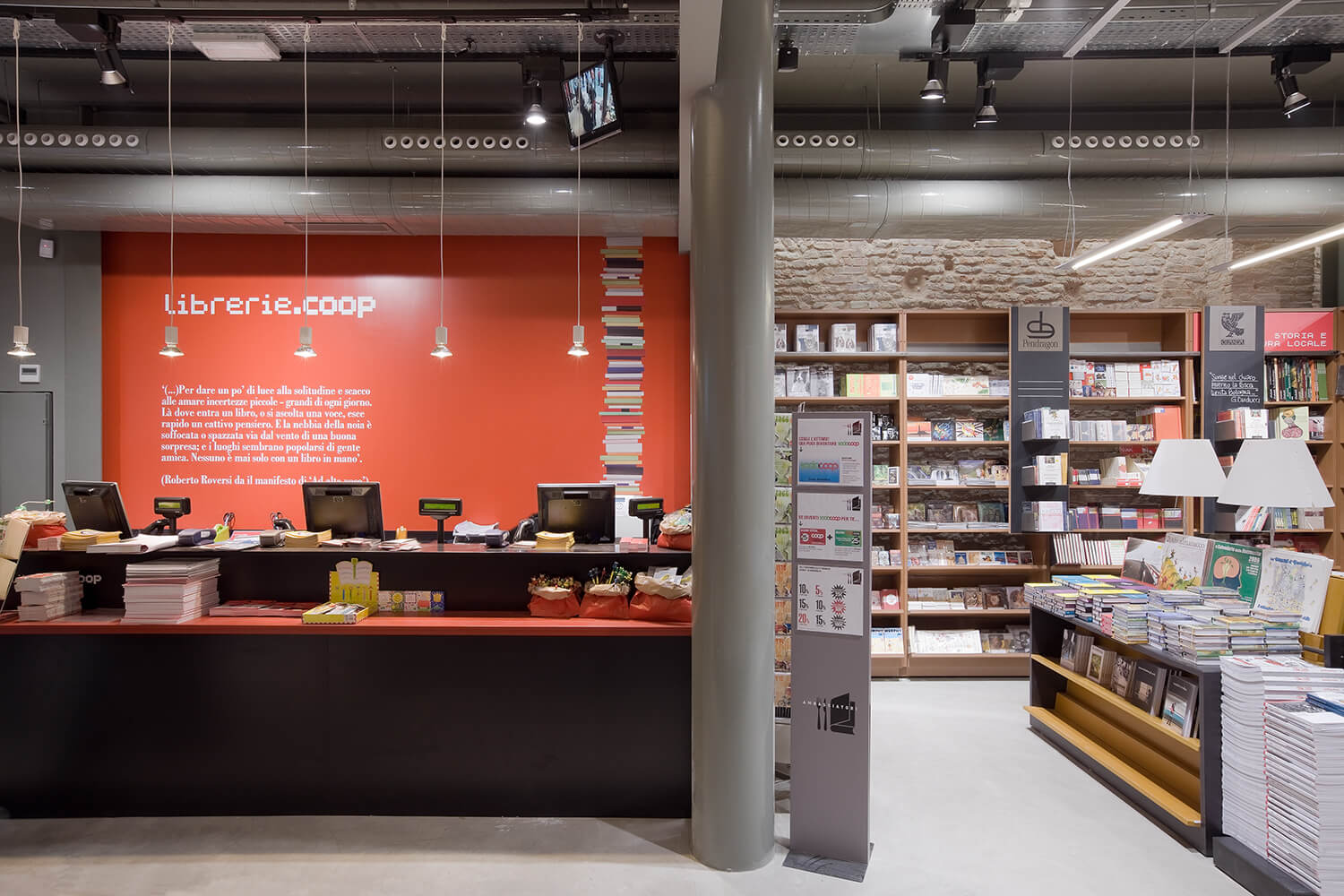 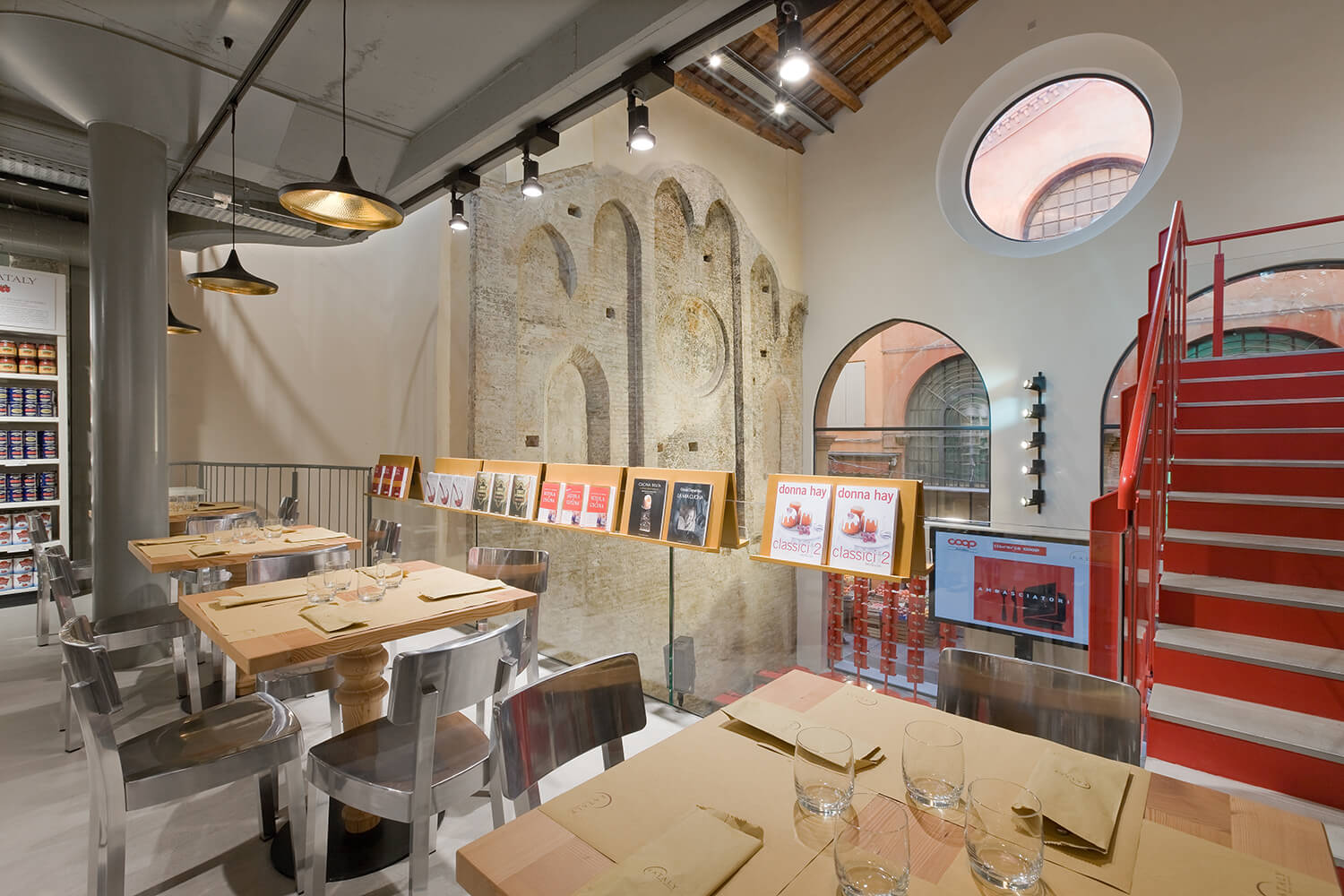 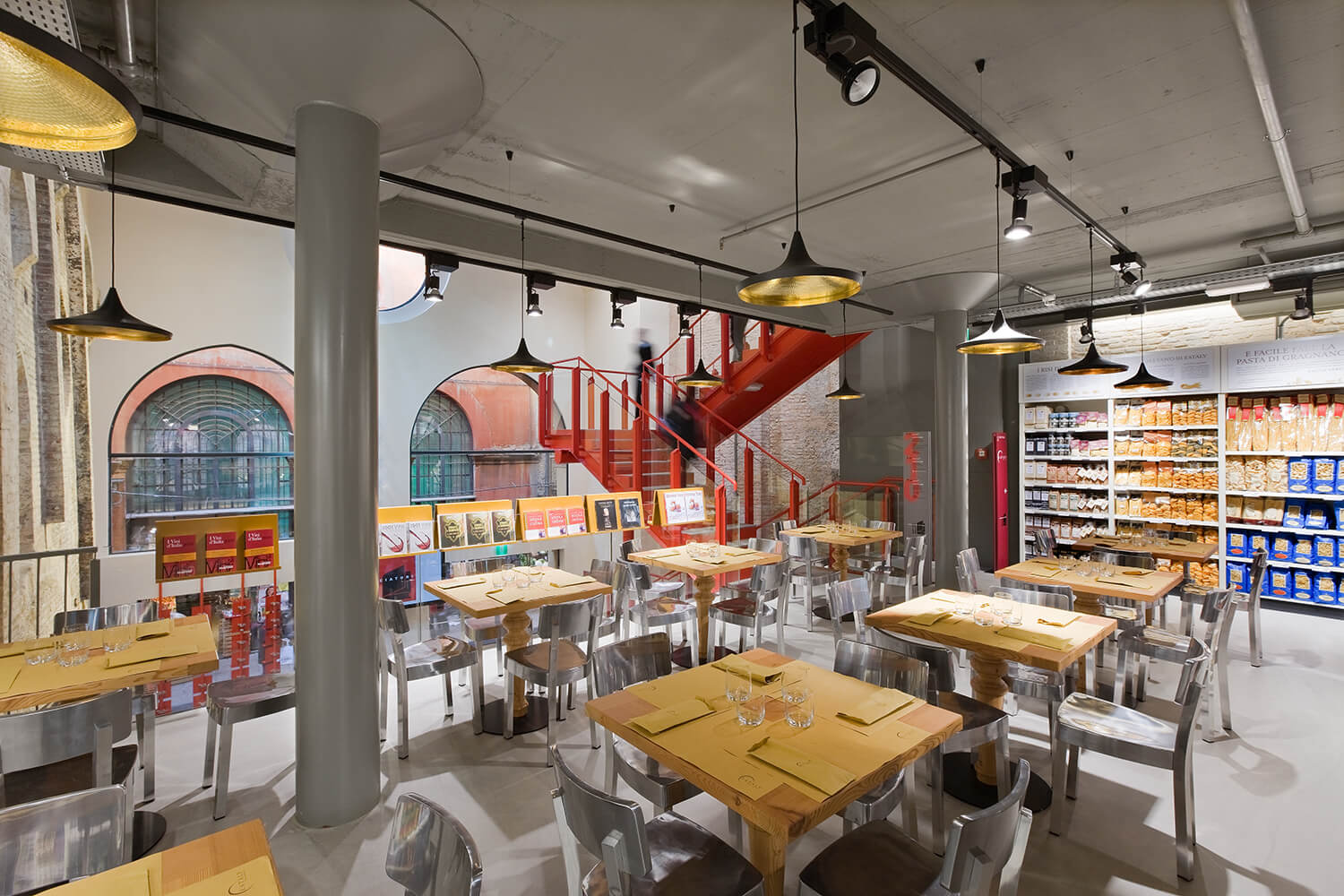 This place has represented, in Italy, a great innovation; it is a space to buy, eat and learn at the same time. 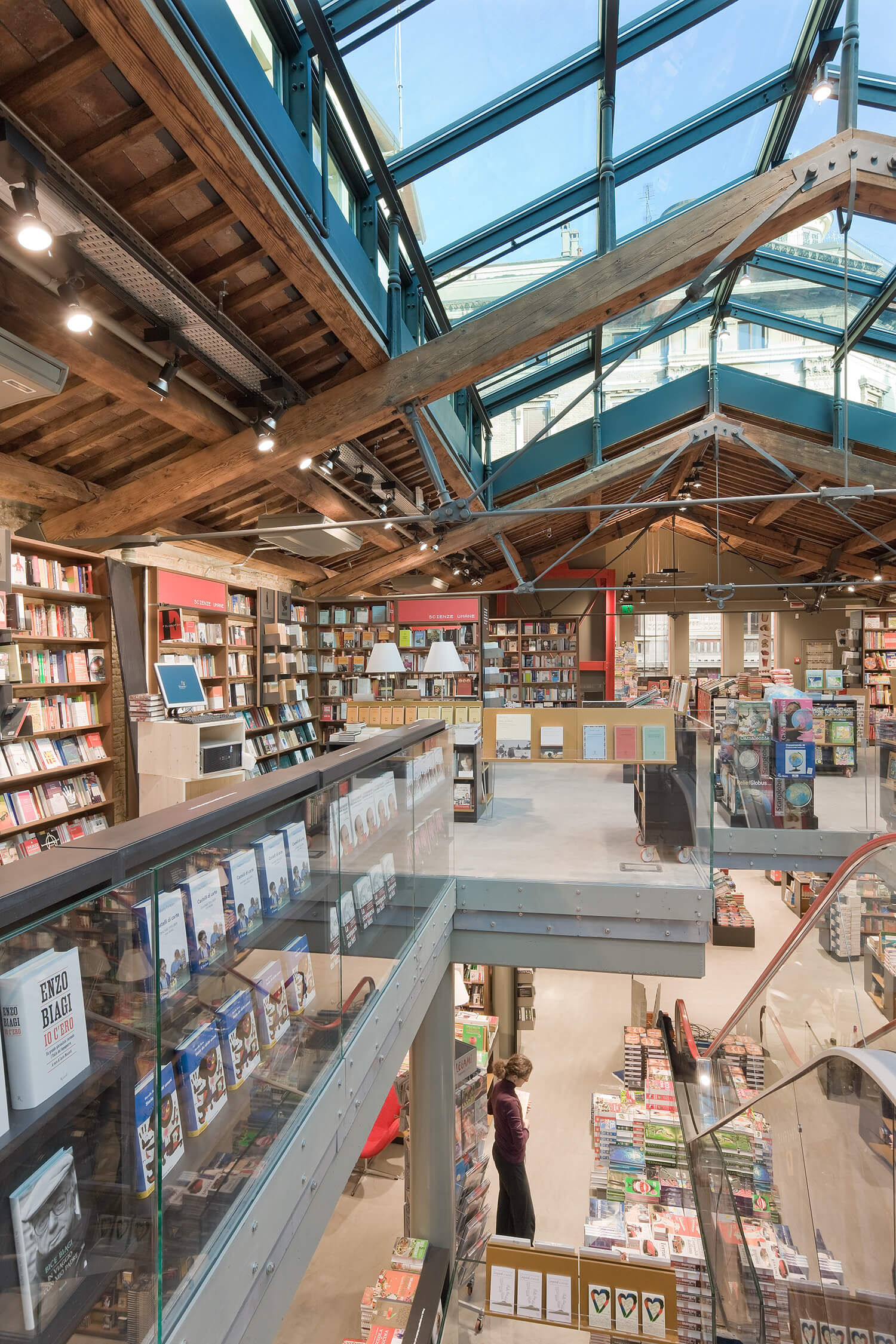 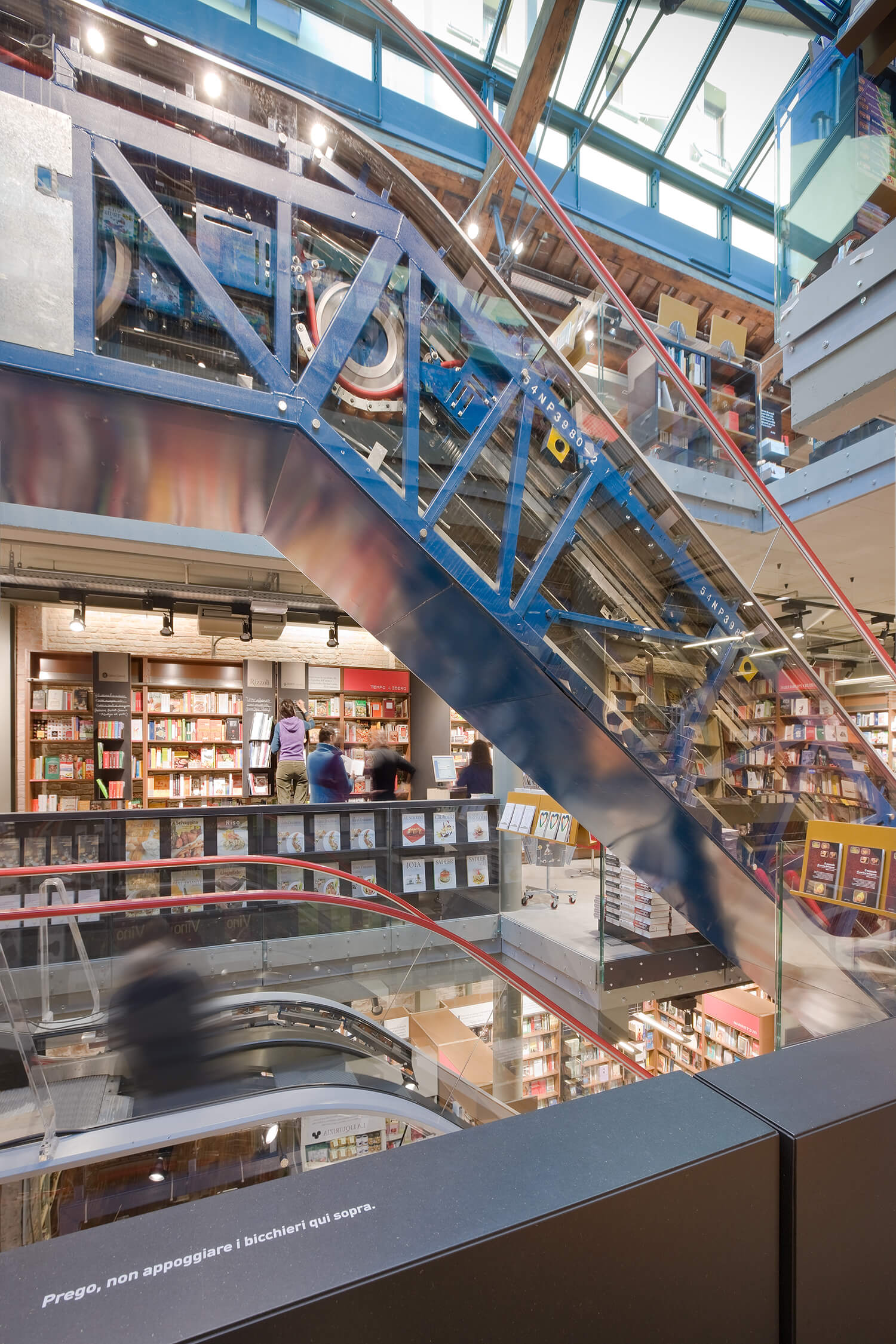 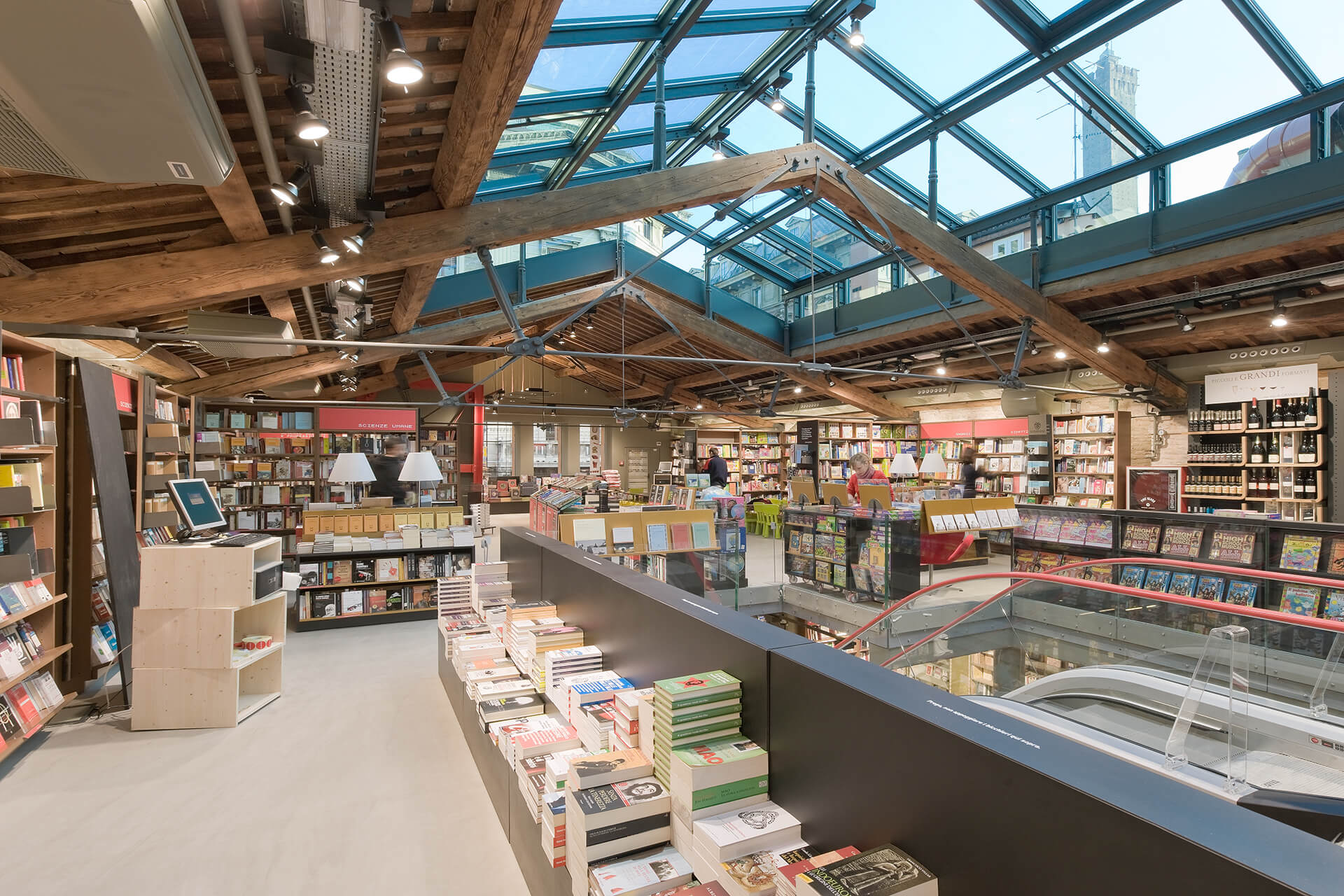 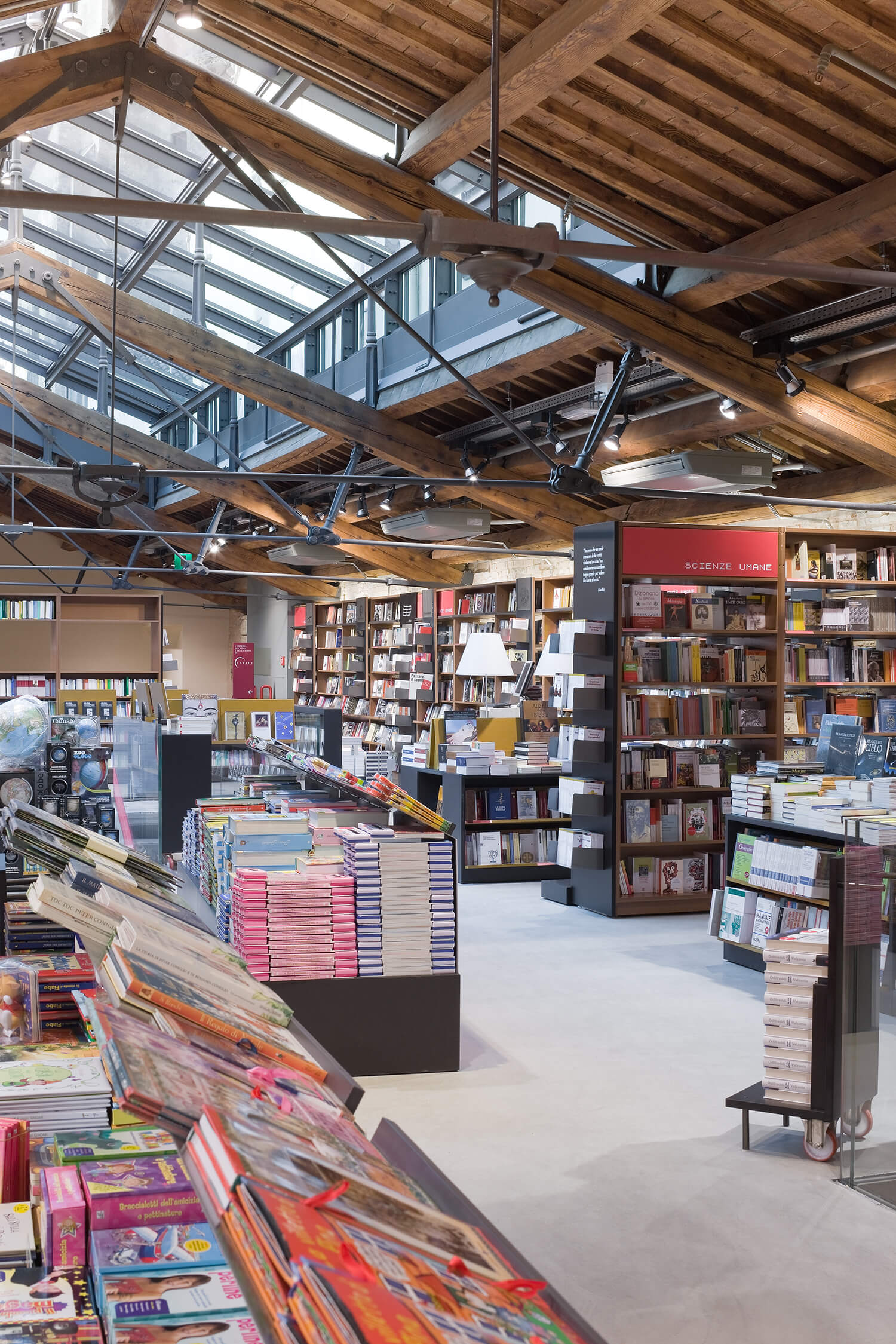 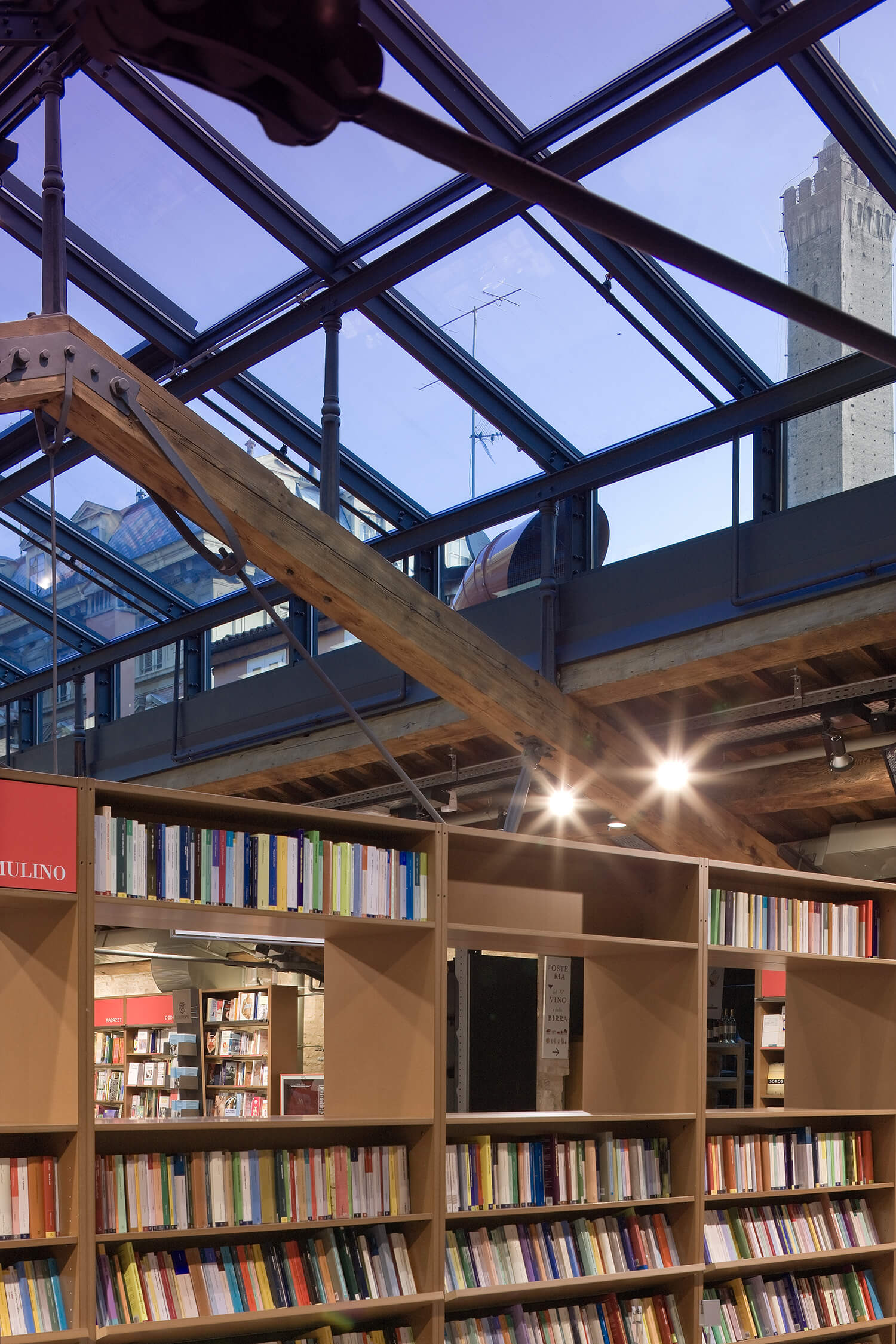 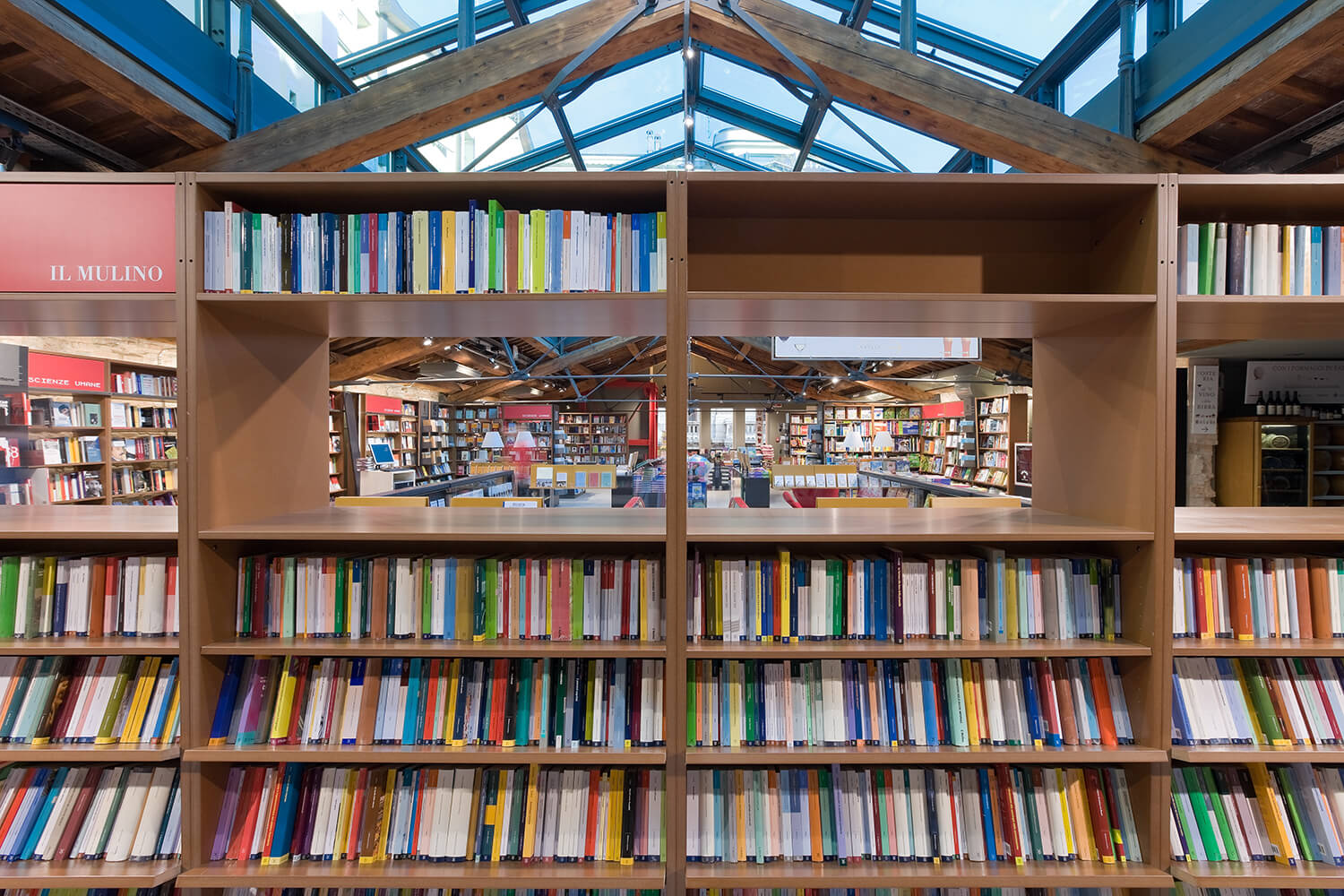 The basic idea of ​​the project was to combine food and culture not in a stratified way but by looking for more complex connections in the space, through an innovative shopping experience.
At the ground level the themes of publishing, current events and news (news and magazines) -as if it was a large newsstand dedicated to books and information- are blended with the theme of coffee, intended as a space to have breakfast, a quick meal or pastry while reading the newspapers.
At the first level there is Eataly trattoria, dedicated to cooking and tasting, and accompanied by books on cooking, leisure, travel.
The second floor (that is, the third level) is dedicated to the theme of the territory, with literary contents related to “Bologna academic city”, to several quality publishers such as Il Mulino –the most famous publishing house in Bologna–, to social sciences and other topics.
To support this emblematic section of products and food then there’s the wine, with a space dedicated to it. 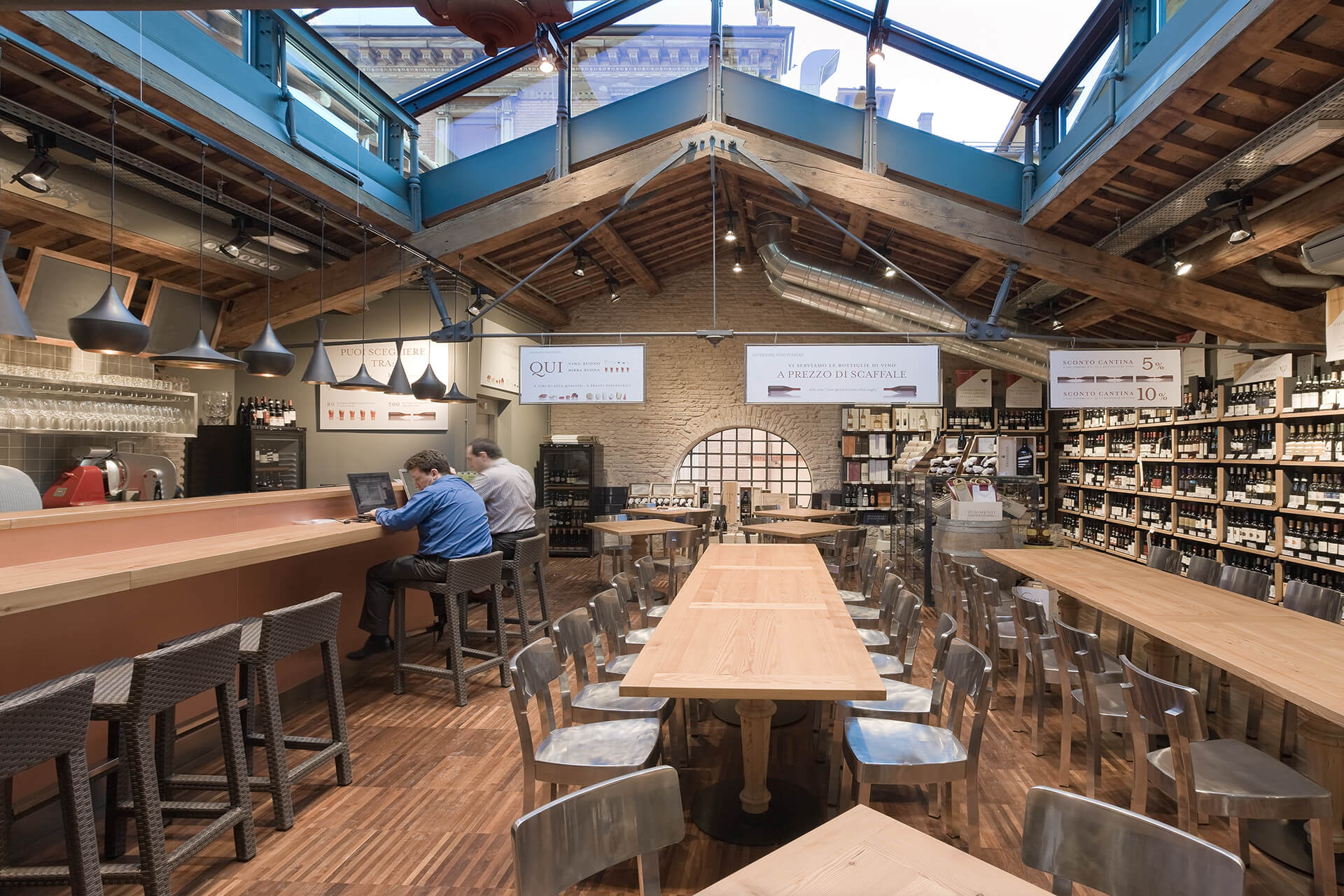